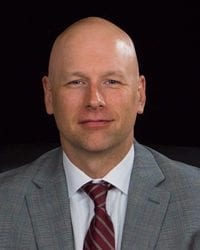 Mr. Goodwin enjoys mountain climbing and cycling and is heavily involved in his church community and Boy Scouts.